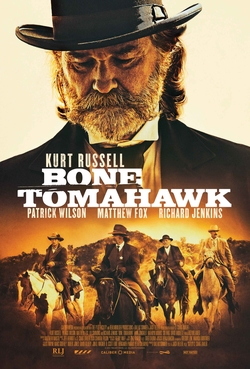 Four men set out in the Wild West to rescue a group of captives from cannibalistic cave dwellers.

‘Bone Tomahawk’ is an intriguing debut feature from S. Craig Zahler, a western with a splash of horror that enlivens its traditional setup. The film focuses on the small town of ‘Bright Hope’, one of those tight knit communities where everyone knows each other and strangers are treated with scepticism at best, and open contempt at worst. This is put to the test when a drifter (David Arquette) turns up at the local bar having been spotted by the town’s backup deputy burying some stolen belongings, where the local Sheriff, Franklin Hunt (Kurt Russell) shoots him in the foot and apprehends him. Unbeknownst to the townsfolk, the drifter and his partner disturbed a Native American burial ground in the film’s opening sequence and the partner paid for it with his life. When the town wakes up to discover the drifter, the deputy sheriff and the local doctor’s assistant missing, four men set off to track them down.

The film has a classic western setting and premise and it plays with this setup before subverting it nicely with the introduction of the films antagonists, a group of deformed cannibals referred to as a troglodyte clan by a local Native American. In the early going, we’re introduced to many of the townsfolk who are a series of interesting characters, most of whom we won’t see again once the film’s primary narrative thread kicks into action. The four who we get to know better are Sheriff Hunt (Russell), Backup Deputy Chicory (Richard Jenkins), John Brooder (Matthew Fox) and Arthur O’Dwyer (Patrick Wilson), the local foreman whose wife is the kidnapped doctor’s assistant. These men set off to track the kidnappers and rescue those who were taken. The performances are very good all round with a strong camaraderie built up between the four protagonists, with Richard Jenkins the standout as the jittery and unintentionally funny Chicory. Russell filmed ‘The Hateful Eight’ around the same time as this film, and if ever there was an actor well suited to this time period and setting it’s him.

The story is a slow burner and the script does take its time to fully grab the audience, but the intensity rises as the characters approach their destination and there’s a lot to love about the dialogue and the fun performances. The horror elements remain in the background for the majority of the film, but they don’t disappoint on the few times they do appear and at times ‘Bone Tomahawk’ is genuinely scary. The use of Native Americans as the ‘bad guys’ hasn’t been seen as commonly of late as it once was, but there’s enough of a twist on the premise to avoid it feeling like old fashioned racism, and these warped descendants make for suitably chilling villains. There are certainly a couple of brutal sequences I really don’t wish to see again!

If you’re looking for something a little different or off the beaten track, with fine performances and a well written script, ‘Bone Tomahawk’ could be the film for you, but it won’t be for everyone.